“Montessori education begins at birth and is an education for life.”

The Montessori approach offers a broad vision of education as a preparation for life. It is designed to help children with their task of inner construction and it succeeds because it draws its principles from the natural development of the child. Ideas are based on Montessori’s observations over 50 years of children of all cultures and ability levels and are universal in their application.

The two key components of the Montessori method are the prepared environment and the trained educator who prepares the environment as a nurturing place for the child, designed to meet his individual needs of self-construction.

Learning through the hand – Children learn by doing. Concentration is built through working with the hand.

Cultivating a natural desire to learn through freedom of choice

Learning through the senses

Fulfill the desire for independence – “do it all by myself “

These basic Montessori theories underpin an environment where children develop: 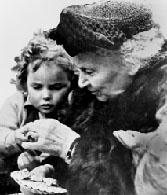 "... Education is a natural process carried out by the human individual and is acquired not by listening to words, but by experiences in the environment.”
Maria Montessori - Education in a New World,1946

Maria Montessori was born in Italy in 1870. In 1896 she became the first woman in Italy to graduate from Medical school where in her last two years she studied Paediatrics and Psychiatry, becoming an expert in Paediatric medicine. She worked initially with children experiencing some form of mental retardation, illness, or disability and had great success with materials and techniques she designed, allowing these children to achieve in areas previously considered beyond their capacity.

In 1907 she was given the opportunity to study "normal" children, taking charge of fifty poor children of the dirty, desolate streets of the San Lorenzo slum on the outskirts of Rome. Here she established the Casa dei Bambini "House of Children”. Through her work with the children she discovered that ‘children teach themselves’ through their effortless ability to absorb knowledge from their surroundings.

Reports of the unprecedented success of her work soon spread. In 1915 she was invited to the USA by Alexander Graham Bell and Thomas Edison and spoke at Carnegie Hall, starting the beginning of an educational revolution that changed the way we think about children more than anyone before or since.

During World War II Dr. Montessori was forced into exile from Italy because of her antifascist views and lived and worked in India. There she developed her work Education for Peace. She was twice nominated for the Nobel Peace Prize. Bringing peace to the world through education was the highest aspiration of her life and work.

She died in Holland in 1952, at the age of 82, and is buried near Hague. Since her death an interest in Dr. Montessori's methods have continued to spread throughout the world. Her message to those who emulated her was to "follow the child".  It is her insightful understanding and her keen observational guidelines that have contributed to the ongoing success of the Montessori Method. 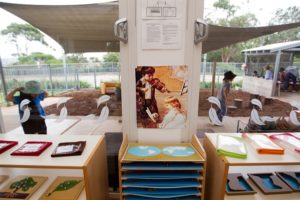 This is a child’s world recognising the size, the speed of learning and the interest of the child. The space is arranged according to subject area, and children are always free to move around the room and to continue to work on a piece of material with no time limit. They work at child size tables that they can move themselves or on mats on the floor, wherever they are comfortable.

The classroom environment encourages children’s natural desire for independence and the development of self-esteem. There is an atmosphere of mutual respect and caring where children develop kindness, courtesy and self-discipline. 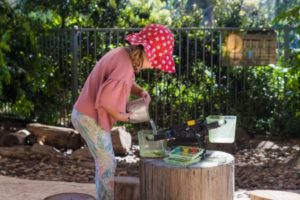 The prepared environment of materials that encourage purposeful activity is essential to the success of Montessori. At each stage of development the physical, emotional, psychological, social and intellectual needs of the children dictate the preparation of the environment. Stimulation for learning comes from the total environment rather than the teacher.

The outdoor area is an extension of the indoor with specially prepared materials and the opportunity to care for the garden and develop an awareness of the natural environment.

“a place of beauty ,simplicity and order “ …….“A place where they feel secure to trust their own powers” - Maria Montessori 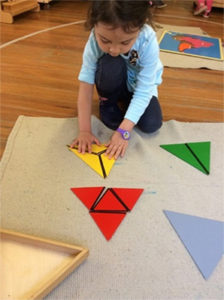 The Montessori materials are a significant component of the prepared environment. Dr Montessori believed that if children are given access to materials especially designed to support their development, they have the capacity to learn by their own actions.

A Montessori classroom nurtures the natural excitement and curiosity of learning by offering a variety of materials to stimulate and intrigue the child. Children can hold cylinders and spheres and work with golden beads to learn the decimal system. It is fun to label a farm and pour water into a’ lake’. The materials demonstrate understanding and serve as the base that will clarify difficult abstract concepts in all future learning.

The specially constructed equipment is made from natural materials and designed through observation of the developmental needs of the child. It provides the opportunity for a child to work on tasks for extended periods of time, thus supporting the development of concentration. As the children work they are also able to gauge their performance because of the in-built "control-of-error” in many of the materials.

The grading of materials provides a safe environment for children of differing abilities, both those who have learning difficulties and those who benefit from acceleration, to grow without being singled out. 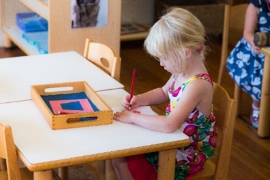 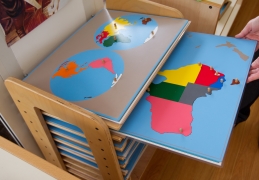 The materials are on display on open shelves indoors and outdoors and are designed to: